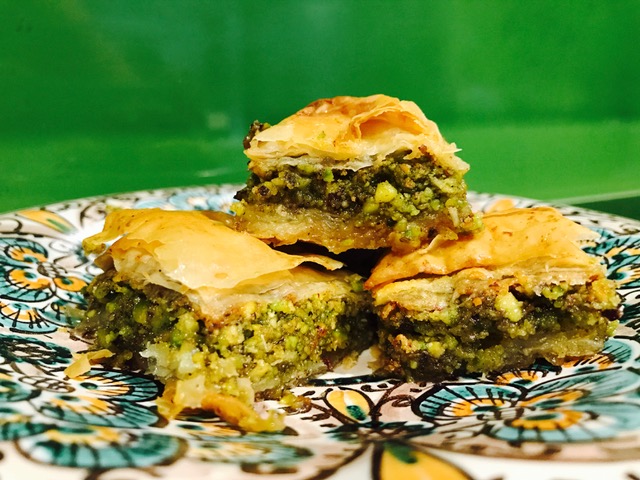 This year, like last year and the year before, I’ve been captured by Masterchef Australia. Perhaps its the fever of the finale of Season 7, or maybe it’s the ever-growing awareness that as my mother’s generation gets older, the baton passes to their daughters to keep the recipes of our forefathers alive, but lately I’ve been trying to create the food my mum, my aunt and their friends were famous for. Well… famous in our community at least.

Growing up, it was a family ritual to sit around the dinner table as soon as dad came home from work. We would set the table then eagerly hang out for the moment he walked through the door, having been teased by the amazing smells of mum’s cooking. She could whip up a dish without a recipe and get it perfect every time. Her method was generally a little bit of this, and a dash of that, a splash of this and a shake of that, and voila, scrumptious, flavour packed roast lamb or stuffed eggplants or kofte. She was even adventurous enough to dabble in Italian and Asian food too. I used to ask her for recipes, and she’d just tell me to watch and learn. Hard to do when she moved so fast and threw things in. ‘You have to cook by eye’, she’d say. I think that was her way of suggesting that cooking was best by instinct.

Looking back I realise I was spoiled with good, wholesome food. We rarely ate out or bought take away. We ate everything that was put on the table without complaint and it was the kid’s job to clean up afterwards. Dad had the kingly privilege of eating and then relaxing, after all, he was our breadwinner. Times seemed simple then.

Just recently I attempted to make my aunt’s creamy pistachio baklava. I can’t begin to explain how amazing it is, and I should know because I’ve had so many baklavas that I lost count in my teens. Its crispy and creamy and sweet and decadent and satisfying. It’s middle eastern pastry heaven.

I followed her instructions and muddled my way through when things got hairy. I balked at the amount of butter and cream in there, but was salivating at the same time, eager to sample the finished product (see picture below). However, I made one big mistake. I was cocky. It can’t be that hard, I told myself. And no, its not that hard to make baklava… but it’s damn hard to make it as brilliantly as my aunt does. Of course it would be… she’s been making it for over 20 years.

With the second piece of baklava quickly evaporating in my mouth, and a halo of happiness surrounding me, I pondered about why I’m suddenly so fixated on learning how to cook Turkish/Syrian/Middle Eastern food. It is, after all, time consuming, fiddly and difficult. It didn’t take me long to understand my own motivation.

I want my children to have the same connection to food that I had. For me, food means family, and it means happiness. It means fulfillment and community. It means my past and my future. It means late nights at the Taverna and big Easter celebrations with everyone reaching over each other for food. It means big fat Syrian Weddings with dabke dancing and it means plain old, around the dinner table family time. Whenever there was a community occasion, there was always an abundance of delicious and varied food.

In the coming years, I will do my very best to be as good as my mother and my aunt, and all the amazing women in our community who could out-cook Zumbo and George Calombaris and Shane Delia in a heart beat. I have an almost impossible task ahead of me, but I believe the journey is in the attempt. Ladies – my hats off to you all.

Tip o The Fez to you.